Aaron Judge could be the Greatest Player in the history of Baseball. He is Big, Strong, Fast, Outstanding Arm, Hits with Uncommon Power, could be a Consistent Contact- Hitter – That would make him a 6-Tool Player. But in order for him to attain that “Highest of High” status, he needs to change one “little-thing” and one “Big-Thing.” —  his Batting Stance and his Stride. 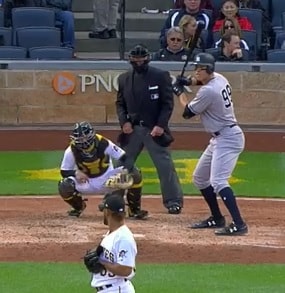 His Stance is a little-thing that facilitates the Big-Thing as you will notice below — His zig-zag Stride toward the plate, and away. Watch the horizontal and vertical movement of head and eyes.

In the picture to the left, his hands and stance are lower, providing a lower center of gravity and faster reaction time. But his zig-zag stride to and away from the plate not only presents visual distortion, jeopardizes his front foot plant to possible injury, but makes him vulnerable to hard breaking pitches moving away from him. The inside fastball (in view) is right in his “Wheel-House,” and a pitch all pitchers should avoid throwing to him.

Because of his “indirect-elliptical” stride, his body tends to drift left, creating difficulty for swinging structurally at fastballs and breaking pitches away. But even then, his uncommon power and fluid mechanics often have him “smelling like a rose” – but on an inconsistent basis.

Once he gets his front foot down and planted, he has the best and most mechanically sound swing in Baseball. Since he is already the strongest man in the Game, he must ask himself, “What can allow me to be most consistent in swinging to make solid contact with the baseball? Why do I need to stride? I don’t need extra forward, linear movement to gain momentum of force to propel the ball out of the park! The rotary action of my hips and shoulders (after my front foot is planted) is certainly powerful enough to make sufficient contact of my bat to the ball — especially while I’m seeing the ball with optimal acuity, by not moving my head and eyes.”

A procedure he could use, if he doesn’t know how to get his body in a “no-stride” position, is to pretend the pitcher has thrown the ball, stride normally, then hold that position until the pitcher actually does throw the ball — then wait, gather, press down on the front foot, and rotate hips, shoulders, arms and bat through the ball as usual, but without the frantic, cumbersome, and useless accompaniment of the “stride.” From the “no-stride” position, he should not have his front foot pointed at home-plate, but rather pointed 120 degrees toward the pitcher to assure more stability as the swing is proceeding, to avoid turning the ankle. Like Williams, DiMaggio, and other “smart” hitters!

At this point in their respective batting techniques, Judge’s mechanics allow for better and more complete hip-action than Stanton with his extremely closed stance. And they both can be Great if they just make slight corrections in their “mechanics.”